Snowtober: I Learned in 31 Hours That I am Not Laura Ingalls Wilder – Nor Do I Want To Be |
Head over to Mama Cheaps to see the latest Elf on the Shelf Master List Ideas - Click Here To Check It Out!

Snowtober: I Learned in 31 Hours That I am Not Laura Ingalls Wilder – Nor Do I Want To Be

That’s what they’re calling it.

You want to know what I’m calling it?

Hell.  Made slightly better with a few glasses of wine.

I was already annoyed with the impending inclement weather for the weekend last week.  We had been planning a family photo session for MONTHS with my very talented (and very overbooked) sister.  In the weeks leading up to our shoot, I had of course been picturing a lovely fall themed series of pictures.  Bright sun, colorful mums, pumpkins smattered here and there – get the idea?  Our chosen location was outdoor and offered no shelter.

So Friday night, as the reports rolled in of cold, steady rain beginning at dawn eventually turning to all snow by evening, we changed locations to my old school.  We figured that there were at least some overhangs if the rain really persisted.

We woke up to pouring rain.  We proceeded as planned – showers, animal and kid feeding, texted my sister to make sure we were good to go.

And heeeere’s the backyard by 9:05 am.  Awesome.  Once again – love how the forecast was that the change over to snow would not happen until around 2 pm!

We hopped in the car by 10 a.m. – after a quick race around our house looking for photo props for our now-turned-holiday-themed shoot.  Quick stop at Walmart (for whipped cream – you’ll see why – and a pumpkin – that we still have yet to carve) and we grabbed my sister on the way to the college.

Photo shoot – AWESOMENESS.  I have only caught a glimpse of a few sneak peaks from my sis – but they are going to be amazing.  We froze as the weather changed from wet snow to rain to sleet to BIG GIANT CRAZY FLUFFY SNOW.

We left Chestnut Hill as the snow pounded down, the roads became super slippery and cars slipped and slid off the road all around us.

The drive that would normally take about 30 minutes took closer to 1.5 hours – with cars into ditches, poles and MANY traffic lights malfunctioning.  This was only around 2 pm – we still had a lot of storm to get through!

We were almost home when we came upon this car in the ditch.  About 1/4 mile further there was a car into  a telephone pole.

3 pm – we arrived home.  Biker Bob’s fire pager went off (literally) as we pulled into our driveway so we raced into the house with Lily and everything from the photo shoot that we could grab from the car.

Bob raced back out to the firehouse and I went to turn on the heat.  Huh.  Heat wouldn’t kick on.  Strange.  Went to put Lily’s milk in the fridge.  Light was off.  Ohhhh – the power was out.

So Lily and I made the best of the situation – put on layers of clothes and I texted Bob that the power was out.  We have been discussing the purchase of a generator for years now and I thought this just might be the outage that pushed him over the edge.  After all, we have horses to water, etc – it’s not really smart for us to be without power for too long.

By this point, the snow was really coming down – everything was covered and we already had at least 3 inches of snow on the ground.

Let’s hold hands and pay our respects to my dearly beloved hibiscus!  I am still mourning her loss!

About an hour later, Bob called.  In a very excited and proud tone,”I’M LEAVING HOME DEPOT NOW!  CAN YOU BELIEVE IT?  I GOT THE LAST GENERATOR IN THE STORE!  I REALLY PISSED A LOT OF PEOPLE OFF – AT LEAST 5 GUYS TRIED TO BUY OURS WHILE I WAS GETTING A CART.  THANKFULLY THE HOME DEPOT EMPLOYEE WAS GUARDING IT IN THE AISLE!”  (And I’m quite sure she wasn’t getting hazzard pay!)

If this isn’t the portrait of manly-excitement-over-power-tools, I don’t know what is.

Then you know what happened?

The power came back on.

Out the door he went.  Lily woke up from her nap.  And then the power went out.  And stayed out.  The first thing that I had to do was turn the generator on by myself.  I won’t lie – it was not pretty.  My hot pink fleece pajama pants crammed into my cowboy boots made quite the fashion statement as I pulled furiously on the stupid pull-starter.  I was about to give up, but at long last, the gas-powered beast roared to life.  We had power.  Or at least, enough to run several crucial amenities.

We had a delicious woodstove fire crackling and were nice and toasty in the living room.

It was about this time that I was able to pull up the electric company’s nifty “Outage Center” on my laptop. (I told you – we only had the necessary amenities… does it surprise you in the least that one of those would be my laptop?!)  Anyway.  This was about 5 pm on 10/29 – so we knew that we were in for a bit of a wait.

Bob was still out saving the neighborhood from downed wires and ditch monsters, so Lily and I settled in for the evening.  The sun was setting, so we were soon left with candle and woodstove light.  It was time to get creative.

We decided that it might be fun to host a My Little Pony horse show right in our living room.

Here are the entrants – checking out the jump course that we have set up. But wait – they need riders!

Snow White exhibited nice form and did make it over all of the jumps – though she came close to earning some penalty points for impractical outfit.

It probably goes without saying, but Foofah was really pushing the weight limit on her pony.

We found a few other activities to pass the time, but the horse show was by far the most exciting.  🙂  Bob finally returned home around 2 am – by which time Lily was passed out on the couch and we settled in for an extremely-uncomfortable-but-at-least-we-were-warm night.

We were fairly grumpy.

The power was still out.  We took a look around outside to assess the damage.  We do not have many trees on our property, but our neighbors have a ton – and their damage was severe with MANY downed trees. 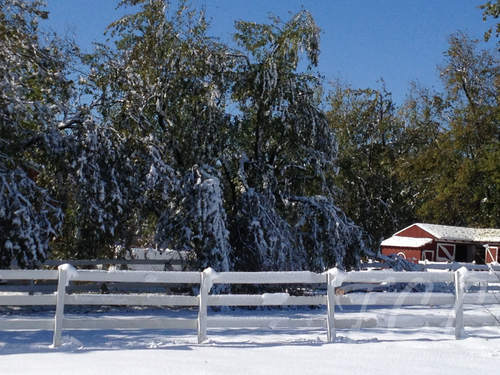 SEVEN inches.  In OCTOBER!  Unheard of… and kind of scares the crap out of me regarding what the weather will be like this winter!

We spent the day cleaning up the house – using the daylight to get ready for the impending dark of night.  On Sunday afternoon, our predicted power turn-on date was WEDNESDAY, 11/2!!  Insane!

Darkness fell and we were ready.  Candles were strategically placed, flashlights had fresh batteries and wood for the stove was replenished.  Lily thoroughly enjoyed eating her snack by flashlight – and later that night we found ourselves thankful for our free glow sticks from the CVS goody bag that Lily got last week!

Just as we were about to dig into our umpteen takeout dinner of the weekend… a miraculous occurrence… the power came back.

I didn’t know whether to laugh or to cry. So instead, I poured a large glass of wine.  I ate a gullet-filling portion of baked manicotti. Then I took a hot shower.

Bottom line: screw the pioneer stuff.  The next time I watch an episode of Little House on the Prairie or Dr Quinn or any Hallmark Original Movie set before 1901, I must remind myself to look past the dusty romance feel – electricity rules and indoor plumbing is progress at its best.  And it will be a long time before I go camping again.

This entry was posted in ramblings and tagged family, halloween, snow, snowtober. Bookmark the permalink.